Had a yummy dinner with the girls tonight. We went to The Lime in South Tampa. 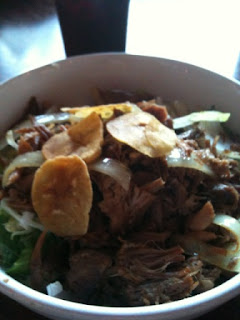 The food was pretty good; I had the “Tampanian” a rice bowl with mojo pork, black beans, and plantain chips (Just a tip, get the bowl without the dressing, I ordered mine on the side for health reasons and I’m definitely glad I did). Definitely go here.
=)

So as previously mentioned, BFFMandy, BFFMandy’s Mom, PZ, and I went to the Epcot International Food and Wine Festival. This was not my first time at Food and Wine, my family and I have gone since I was in college, but the is the 15th anniversary, so there are new kiosks and tons of options for fun. Now, let me state up front that I am lame and I forgot my camera. I didn’t realize until I was almost to the theme park. So no pictures, but I’m going again this weekend so there will be pictures eventually.

Ok so I know that all the maps of Epcot start the World Showcase in Mexico, but I’m a rebel and I prefer to start in Canada. I’m not actually a rebel, I do this because the World Showcase usually opens around 11AM and if you start in Mexico you spend all afternoon with the sun in your eyes; if you start in Canada you’re walking with the sun at your back (or side) in the afternoon. This doesn’t have anything to do with my recap of The Food and Wine Festival except if you’re looking at the festival guide I’m recapping in reverse.

First up:
Greece:
Greece is a perennial festival favorite. This year PZ and I had Chicken Souvlaki with Tzatziki, though I seriously considered the Spanikopita because it is to. die. for.  But back to the chicken. They were making it fresh as we ordered (we were just lucky), so the chicken was piping hot. The tzatziki was cool and garlicky and the pitas were warm and perfect for folding around the chicken or sipping up extra sauce. All in all an A.

Canada:
You know what I had in Canada. The Canadian Cheddar Cheese Soup. This soup is deliciousness in a bowl; it doesn’t matter that I’ve had this soup at home at least a dozen times there is something about having it at Epcot. I’m actually fairly certain the published recipe isn’t exactly the same as the restaurant recipe. The texture at the park is ridiculously smooth and creamy. I also had a glass of Chateau des Charmes Riesling, it was light and fruity it would;ve been a better match for the Maple-glazed Salmon, but what-evs. A+

Ireland:
Lobster and Scallop Fisherman’s Pie. Does that say enough? No? It was very good, the potatoes were creamy, peppery, and just the right amount of crispy on the top. The inside had a good amount of seafood in the relatively small dish, I got two scallops and several large pieces of lobster in a creamy tomatoey lobster bisque. Accompanied by a perfectly poured Guinness and eat in the shade next to the World Showcase lagoon, we couldn’t stop talking about what great weather we lucked into. A

That’s all for tonight. Up later this week, France, Australia, and South Korea.
=)

My friend PZ celebrated his actual birthday a few weeks ago and today he and his boyfriend, J-Dubz, came to Tampa so BFFMandy and I could celebrate with him as well. Our initial plan was to have breakfast at First Watch and then go to Venice Beach. But due to the weather the day didn’t turn out quite as we’d planned.
BFFMandy, C-Dawg, and I met PZ and J-Dubz at First Watch. It’s one of my favorite breakfast/brunch spots. I actually don’t think I know anyone who dislikes going there. Anyway the restaurant isn’t far from the house or the interstate; so we met there and had a great breakfast. I had biscuits and gravy. It was quite good; the biscuits were hot and fluffy with just a bit of a crunch on the bottom (which is how I prefer my biscuits) and the gravy was smooth with nice chunks of savory sausage. After breakfast we made our way to Publix (the best grocery store on the face of the planet) to forage for beach supplies. I picked up PZ’s birthday cupcakes; more on that later. We gathered chips, dip, ice, and we attempted to buy drinks too, but were unable due to the fact that it’s Sunday.
Eventually we (PZ, BFFMandy, J-Dubz, and I, C-Dawg had to work) made our way to the beach. We made a valiant attempt to enjoy the “last beach weekend of summer” but a thunderstorm cut our sunny day short ; PZ, BFFMandy, and J-Dubz did get to spend some time in the water (myself and my injured ankle stayed on the blanket and read). We actually attempted to go to another beach, but  to Blackberries and an iPhone later we accepted the storm covered pretty much the entire gulf coast in our area. After the beach be came home (where it was not thunderstorming) and spent the afternoon at the pool. Many hi-jinks and freeze pops were had.
The pool was followed by some brief iPhone research and plans for Pit Boss and bowling. Pit Boss is a BBQ restaurant in New Port Richey. The BBQ is fantastic smokey and meaty. You can see the smoke billowing from several miles away and smell it as soon as you walk in the front door of the restaurant. The staff is friendly and helpful and the french fries are always hot and crispy. BFFMandy have actually gone out of our way to go to Pit Boss. The name of the restaurant is also the cause of some not common sense on both our parts (see below):

Me (25minutes into my first visit to Pit Boss, just noticing the decor): Oh, Pit Boss…like Vegas and gambling…


Today:
Me (defending my initial lack of common sense): Yeah, but there’s that show on the Discovery Channel called Pit Boss…
BFFMandy: What’s it about?
Me: BBQ…
PZ and J-Dubz: (laughter)

Fabulous birthday dinner was followed by bowling. We went to Lane Glo also in NPR.

Bowling was a much more interesting experience with only one foot. As you know, I was “booted” earlier this week and PZ’s birthday excursion was my first outing. I actually did pretty well, I managed to get a strike and not to come in dead last at least one game. Plus, we all had fun.

After bowling we returned to the house and had cupcakes. I usually would’ve made cupcakes, but I was a little worried I wouldn’t be able to be on my feet long enough. I texted PZ earlier in the week and he asked for white cake and plain buttercream. Since I know Publix cake is fabulous (it’s one of the reasons Publix is better than every other store on the planet) and I know PZ likes their frosting I ordered him a half dozen cupcakes. They were darn good.

I am live music lover. Unless it involves screaming or rap if it’s live I’m game. So when this conversation happened:
Bff/Rooms: PIC!!!! (as she burst into my room)
Me: mmmrrrph, what? (I was almost asleep)
B: Jack Johnson is coming to Florida, we should go.
Me: Yeah, okay. When is it?
B: August 25…
Me: It’s March…
B: Yeah….do you want to go?
Me: Why not?
B: Okay, I’ll get tickets for you, me, and C-Dawg.
I was happily on my way to a mellow evening of surfer dude hippy music.

The concert was at the 1-800-Ask-Gary Amphitheater (Disclaimer: This is the first, last, and only time I will mention refer to this venue as the Ask Gary Amphitheater. I will refer to it from here on out as the Amphitheater of the Tampa Amphitheater). BFF/Rooms/PIC Mandy and I picked up C-Dawg (her boyfriend) at his house and we were off for a fun and rainy evening. The first opening act ALO went on at 7PM, we were just getting to the parking lot as they started their set. We had great parking (read: STELLAR) usually I wouldn’t mention this, but the Amphitheater is at the State Fairgrounds which are dirt/clay/not paved and it has been raining in Tampa since Sunday (At a previous concert it was so muddy I almost lost my shoes, not  flip-flops an actual enclosed shoes).  So we parked and made our way up to the venue.
After last summer’s Kenny Chesney debacle we opted for seats instead of the lawn. G Love took the stage about twenty minutes after we got to our seats. I honestly wasn’t sure what to expect from a guy called G Love. What we got was bluesy/folk/hip-hop that had people dancing in their seats and jamming right along. The highlight for me was the ingeniously titled “Cold Beverage” which proclaims a love for all things cool and frosty. G Love also produced one of the evening top 3 moments (even if only BFFMandy, C-Dawg, and I got it.) Prior to singing “Booty Call”, about his parents meeting in New Jersey, the native Floridians were asked to identify themselves and then the folks from New York/New Jersey/Philly were given a shout out. The applause from the Northerners by far out shined the native Floridians. BFFMandy joined in with the New Yorkers which prompted a conversation that went like this:
Me: You are not from New York
BFF: Connecticut might as well be New York.
C-Dawg: But it isn’t and he didn’t say CT.
Me: When he does you can say “Me” (This was accompanied by arm waving)
BFF: You look ridiculous
Me: You can say “Me, MandyE, eating a lobstah.” (All of this accompanied my ridiculous gestures)
BFF: (Mocking me) “Me, MandyE, eating a lobstah.”
Clearly we don’t need much encouragement to be ridiculous. G Love finished his set with one more song; which according to C-Dawg Jack Johnson usually accompanies him on. Around the time G Love finished it started to rain and despite our seats under the awning we were still getting wet. We made a brief attempt to move further inward, but ended up back in our own seats when the actual ticket holders showed up.
Finally, finally, finally Jack Johnson took the stage. He opened with probably my second favorite song, Banana Pancakes. Overall I really enjoyed the show. He played all the really popular stuff and even the stuff I wasn’t familiar with I really enjoyed. There were the crowd pleasers like Sitting, Waiting, Wishing and Better Together (the last song of the show.) The highlights for me were Upside Down, an awesome cover of Tom Petty’s Free Fallin, To the Sea and Bubble Toes. By far my favorite moment was Jack’s cover of Jimmy Buffett’s Pirate Looks at 40. It’s one of my all time favorite Buffett songs and the version from the concert was wistful, dreamy, and absolutely perfect.
More Pictures!!

It was a great night and we had tons of fun.
Smiles!